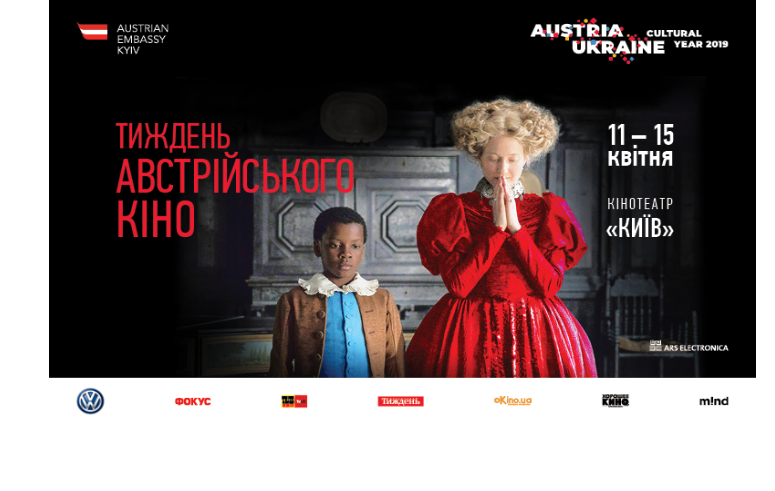 On the 11th of April in Kyiv there will begin the Austrian Film Week. The programme presents three feature films: a romantic comedy, historical drama and documentary. In addition, there will be screened a selection of short films by the ARS ELECTRONICA Multimedia Arts Festival. You can find more information about the programme on the Facebook pages of the Austrian Cultural Forum Kyiv and Arthouse Traffic, as well as on the website of the cinema „Kyiv“.

The festival will be opened by the romantic comedy “Love Machine” by Andreas Schmid. In the focus of the story is the love of a sex worker and driving instructor.

Events unfold in Vienna at the beginning of the XVIII century, the drama tells a story of an African boy-slave. A Countess starts to take care of him: she decides to baptize him and give him education. One of the main roles in the film is performed by the star of Italian cinema Alba Rorvacher (“Happy Lazarus”, “The Perfect Stranger”). The movie of Markus Schleinzer was awarded by the Austrian Film Award for the best costumes, make-up and design.

A new work by the prominent Austrian documentalist Nikolaus Geyrhalter, laureate of the European Film Academy. In the film, the director explores the relationship of the mankind with the crust of our planet: people take the existence of the earth’s crust for granted; it seems immutable. According to Geyrhalter, if we see our planet as an organism, then its crust – which is only 40 kilometers thick – is its most vulnerable part. “Earth” was first introduced to the public in the category “Forum” at the Berlinale an awarded by the ecumenical (Christian) jury.

PROGRAMME OF THE SHORT FILMS BY ARS ELECTRONICA 2018

Austrian Film Week will feature the selection of the best media works chosen by the international festival of multimedia arts, ARS ELECTRONICA. The movie review takes place annually in the Austrian city of Linz and presents advanced visual technologies.

Austrian Film Week will be held in Kyiv from the 11th till 15th of April. After the festival activists and heads of film clubs will be able to screen the films in their cities in the framework of the project “Cinema club.Ukrainian Network ». Apply on the website kinoklub.org.ua to participate.