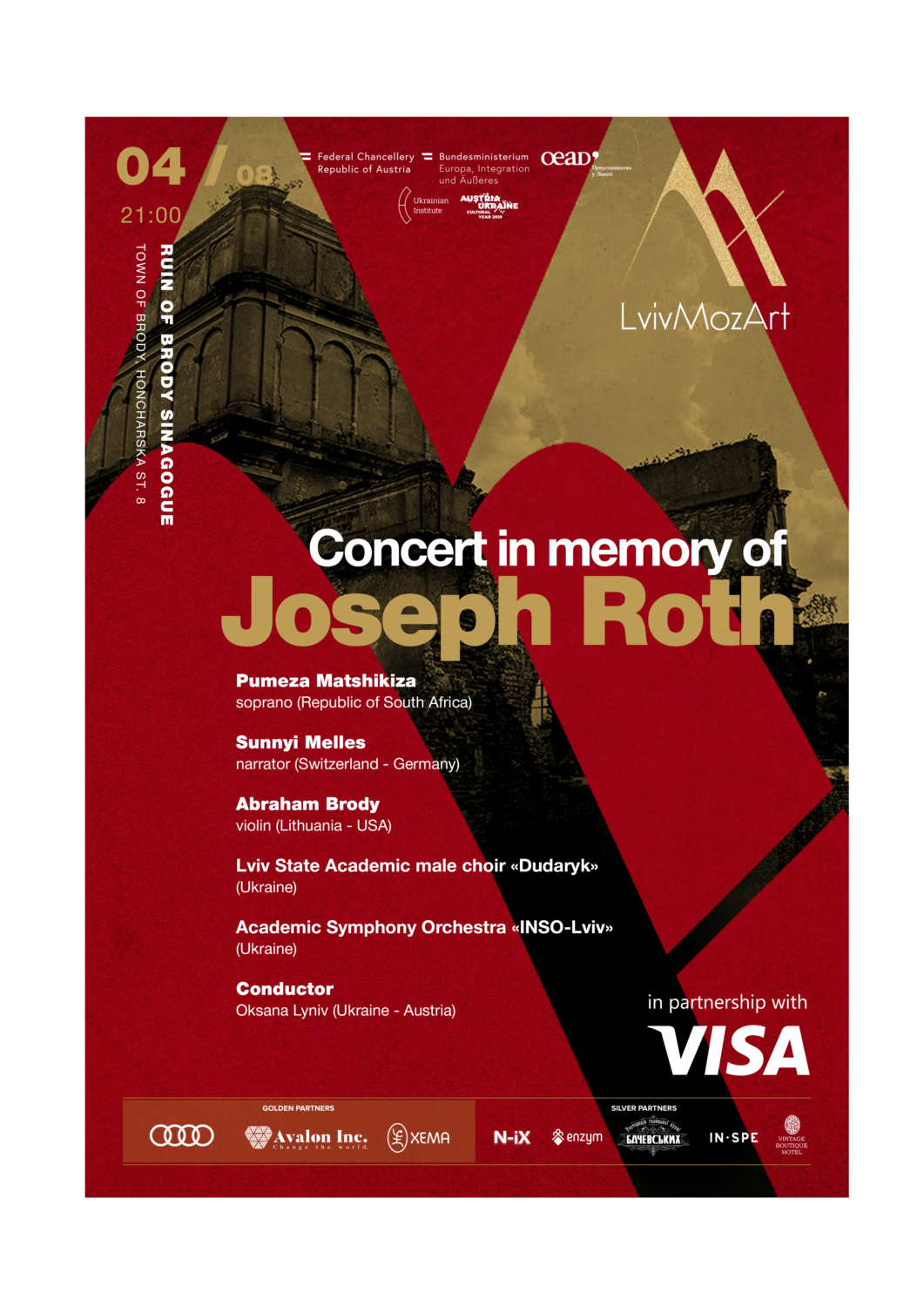 International Festival LvivMozArt 2019 honours the figure of Joseph Roth with a historic event - a grand memorial concert to the double anniversary (125 years after birth and 80 years after the death) of the writer. Joseph Roth is one of the most important German-speaking authors of the twentieth century, whose dramatic fate combined Ukrainian, Austrian and Jewish histories and became a symbol of Ukraine's inextricable ties with Europe.

It’s the first time in the history of Ukraine and Austria when commemorative concert will take place in writer’s Galician Motherland, near the ruins of Brody Synagogue.  This building, while being one of the biggest Jewish temples of Eastern Europe, was half-ruined during bombing of the Second World War. As a living witness to tragic events, it will be a real coulisse of unique artistic performance with modern staging, video installation and symbolic program, in which more than 200 artists and star soloists from the whole world will be engaged. Our special duty is to remind our contemporaries – “never again”!

Together with a great resonance in Ukrainian community international media (channels ARTE, WDR and DeutscheWelle) are also interested in the grandiose concert.

”Galicia, the big field of big war, is not rehabilitated yet”, Joseph Roth wrote in 1924. He was born in the Jewish family in Brody and felt the changeability and bitterness of Jewish life in Europe of that time. His life was in merciless millstones of totalitarianism: after going to USSR Roth was disappointed and wrote anti-communism articles, where he declared: communists were atheists and gave Nazis the way to power. In 1933, when Nazis came to power in Germany, Roth’s texts became prohibited and writer was also persecuted.

There is a work “Kyrie eleison” by modern Ukrainian composer Bohdana Froliak and a premiere of Abraham Brody’s work (violin-performance, USA), created especially for festival, in the concert program. Symphony No. 3 “Kaddish” by a prominent American composer, conductor and humanist Leonard Bernstein, son of Jewish emigrants who originated from place near Ukrainian city Rivne, will be a culmination of performance. Symphony No. 3 by Leonard Bernstein was written using the canonical texts from ancient Jewish prayers. It is an artist’s reaction to Holocaust and dedicated to the memory of John Kennedy who tragically died several weeks before the premiere of this work. This composition became the world symbol of Jewish nation’s fate and frank epistle to the next generations – “Never again!”.

The LvivMozArt Festival was founded in 2017 on the initiative of well-known Ukrainian conductor Oksana Lyniv in Lviv. The idea of the festival was inspired by the personality of Franz Xaver Mozart, the son of the brilliant Wolfgang Amadeus Mozart, a renowned conductor and composer who lived and created over 30 years of his life in the capital of Galicia, Lviv, and transformed it into one of the most important cultural metropolises of its time.